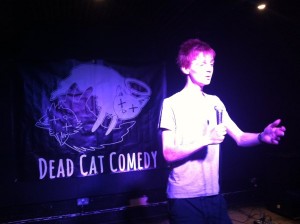 Dead Cat Comedy returns home from Edinburgh Fringe Festival. Whilst we are experienced in the ways of The Fringe this was our first trip up to Scottyland with the Dead Cat brand. It was tough but equally rewarding month. We made new friends, lost iPods and accidentally flyered Victoria Wood. All in all, it was excellent!

We ran 2 shows a day! First, at 4pm, an afternoon stand-up showcase. Our idea was to make the ultimate afternoon showcase. Just a chilled-out hour of top-quality stand-up comedy. Red Redmond was to host each show alongside a hand-picked selection of the best comics in town. Mission accomplished! Every day we packed-out the top floor of Opium, Edinburgh’s premier Rock Nightclub. The recently refurbished room had a cracking stage, top-knotch lighting and could comfortably seat 80 people (which, on weekends, we did!). More importantly, the staff were fantastic! Lovely, helpful people, from the sound tech to the area manager. Also, we got to do our first show with a Guide Dog in the audience…he was very well behaved. We definitely, totally, utterly hope to return to the same venue next year, paws crossed.

Our second show, Dead Cat Comedy Club: LATE SHOW, was a very different beast. Wilder, ruder, Edinburgh’s newest and nastiest late night stand-up showcase. Situated in the back room of The Globe, a lively Sports Bar at the heart of town. Every evening at 11pm we would kick-off the show to a full room of feisty festival goers from around the globe. Our audience was so varied, they appeared to get increasingly exotic as the Fringe continued. Red Redmond met his first audience member from Guyana, a country he never knew existed. Highlights include Phil Ellis stealing a rugby shirt off the ceiling, a number of comics waging war on next door’s karaoke and Richard Massara inevitably getting his cock out.

We also managed to see a decent smattering of shows. Our favourites include Carey Marx: Intensive Carey, Glenn Wool: This Road has Trolls, Tim Fitzhigham: Challenger and the truly unforgettable Red Bastard. However our super-mega-favourite show has to be Phil Ellis: Unplanned Orphan (a show that was previewed twice at Dead Cat Comedy Club). Whatta show! Chaotic, unpredictable and utterly hilarious. Thanks Phil!

Whilst we did have an excellent Fringe, I think it’s important to remember those who didn’t. A lot of our fellow comics and promoters struggled at this year’s festival. Whether this was due to poor organisation, unfit venues or low audience numbers, I’ve never known so many acts to cancel entire runs of their shows. This just goes to show the pitfalls of the Fringe. Thankfully we had an excellent time. You can tell we had a good time because we’ve come home with something very few manage to achieve at the Fringe: Profit. Our festival experience has rewarded us with a not-too-shabby £500. This money will be pumped straight back into Dead Cat to help pay for future design work, promotional gear and maybe even a little bit of professional filming. Yay!

Enough of the Fringe. Now we’re back we can concentrate on our own beautiful Comedy Nights. Our first show back is on 16th September and features a corking line-up including Rich J. Wall, Sean Morley and Chris Brooker. The show will be held at Sandbar and is totally and utterly NOT TO BE MISSED! Similarly, our second show is on 23rd September and has an equally unmissable line-up. Did you miss us? We missed you.

« THIS MONTH!
Dead Cat T-Shirts anyone? »
View more posts from this author