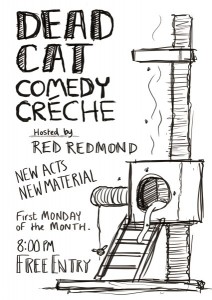 Usually our nights are all about 100% top quality stand-up comedy. But we understand that it takes time and dedication to reach that quality. Whether you’re an established act honing new material or a new act taking their first steps, we’re here to help. Say hello to Dead Cat Comedy Créche. Manchester’s newest and nicest Open Mic Comedy Night.

We want to help newer acts get a feel for the art of stand-up. We don’t believe in gong shows or making the acts compete against one another. We just want to give acts time to develop their skills in a judgement free environment. We also think its important for the newer acts on the bill to mix with seasoned professionals. Ya know, to show em how its done. So we’ve invited down circuit headliner Ben Schofield ‘Impressive…best act of the night’ – XS Malarkey. Ben’s a fantastic comic and it’s a real pleasure to have him down. 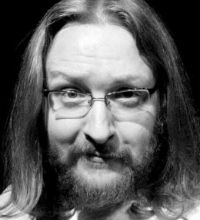 Future dates…If you’re a new comic or established act with some material that needs airing then we’d love to hear from you. Please send all gig requests to red@deadcatcomedy.co.uk We won’t be able to get back to everyone but I hope you appreciate that will try.

« MEMBERS ONLY!
THIS MONTH! »
View more posts from this author