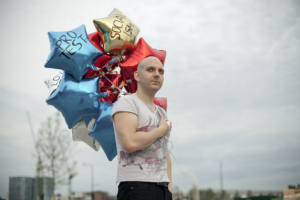 Chris Coltrane brings his unique brand of political comedy to The Dancehouse this Saturday! (Tickets Here!)   Satirical stand-up from a fascinating comedian. The only thing he loves more than comedy is social justice. We caught up with him to ask him 5 questions…

“For those pining for a good solid political comedian, this guy could be your saviour.” The List

1. Why is political comedy important?— Maybe it sounds silly, but I think that comedy can genuinely change the world, and hold powerful people to account by turning them into a figure of ridicule. For example, when I was 13 there was a bigger boy in school who would bully a lot of people, steal their brunch money, eat their homework, beat them up and down, flush their head down the Armitage Shanks E876301, the usual stuff. A lot of people were scared of telling the teachers of him, because the bully… well, as unlikely as it sounds… he was also the headmaster. And to make matters worse, the headmaster was Ant and Dec, from off the telly. He (they) was (were) a tyrant, and the teachers were powerless to do anything about it.

So instead of reporting him, I wrote a 90 minute stand-up show about him, which I successfully toured for 215 dates in regional arts centres in England and Scotland, but not Wales. This ashamed the two-headed headmaster on a truly national scale, and he was forced to resign. The children were free from misery, and I got some nice four-stars reviews from the broadsheets, so it all worked out well.And that headmaster? Well, you probably know, the double-beast went on to be the darling of Saturday Night ITV, with shows like “I’m A Celebrity, Please Let Me Out Of This Jungle!”, and “Saturday Night Fish And Chips”. What a world we live in.

2. What topics will you be tackling at The Dancehouse this Saturday?— There’s a lot of problems in the world right now, and I can’t guarantee that I’ll fix all of them, but I can guarantee that I’ll fix almost all of them. I’ll be explaining why the Tories are wrong/bad etc, why Labour abandoned us and how Corbyn might give us some hope, I’ll be saying why I think drugs should be legalised, why superfoods aren’t a thing, why people who say things like “Britain Is Full” should be deported, and on top of all that, one lucky winner will get a chance to win £100,000,000,000,000,000,000 thanks to the enormously kind generosity of the Dancehouse! Isn’t that lovely of them? Got to be worth coming just for that, if you ask me.
View Tickets
3. Politics is boring. How can it possibly be funny?— Aah, this is a bit awkward: It isn’t funny. Not even a little bit. I know that we’ve billed this as a night of comedy, but actually it’s going to be a difficult and upsetting night of cold truths and hard facts. Sorry about that. 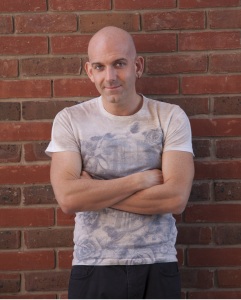 Ha! Don’t worry Susan, I’m Just Pretending™. No, we’ll make it funny by using jokes. I shouldn’t really be telling you this, because it’s a bit of an industry secret, but us comedians use jokes all the time to make things funny. You’ve probably seen political comedians before, and thought to yourself “Well, usually politics is boring, but that was the opposite of boring! How did they do it?” Go back and watch it again. I bet you didn’t spot the jokes the first time, did you? But now you know how we do it, you won’t be able to help spotting them.Some people say it’s a bit hack. Haven’t people been using jokes forever? Well, yes, but that’s because they work. I’ve tried getting laughs by other methods (committing arson, by reading the telephone book, by building a family over many years and then ruining it all with a hopeless night of romance with the manager at my local B&Q), but nothing gets quite the same laugh as a good old fashioned joke.

“One of a handful of comedians who are the future of British political comedy.” – Mark Thomas

4. Who are your biggest influences? 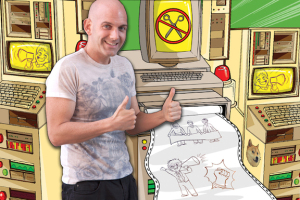 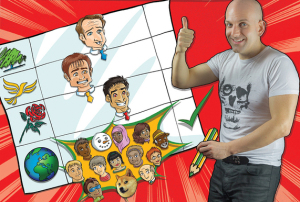 — Probably Andrew. Do you know Andrew? Mates with Kerry and Jill and all that lot? I think you do know him, we met him at Lindsey’s wedding. Great guy. Do you remember? You must do. Big chin. Like, really big. More chin than face. Andrew! How do you not remember him? Andrew, with the massive eyes? And the great big nose and ears? Actually all of his face and body is massive, but it’s all in proportion so he looks normal but he’s fifty foot high. Fifty foot high Andrew? For Christ’s sake, how can you not remember Fifty Foot Andrew? The massive guy? He babysits for us all the time. Remember the massive babysitter? We had to have a special door put in to let him in. Andrew! Massive Andrew! That speaks twenty languages, and taught you ten of them. Remember? The guy that taught you French and Binary? Massive multilingual magic Andrew? Gave you a Twix last week? Yeah? Yeah, I thought that’d jog your memory.Anyway, he’s probably been the biggest influence on me. I’m not quite fifty foot high yet, nor do I speak more than English, and PS also I’m not magic. But I’ve been influenced by his #kindness. Perhaps you wouldn’t understand…

5. Thatcher, Blair or David Cameron. Who would make the best stand-up comedian?— Well, let’s discount Thatcher, because quite famously she did work as a professional comedian for 79 years before entering politics. I mean, she was undeniably talented. She had timing and stage presence, and she could definitely write a joke. It’s just a shame that those jokes involved laughing at children drinking milk in school, or people doing manual labour. She had skill, certainly. But how sad that she used her punchlines for evil.So, Blair or Cameron? Well, neither have the common touch. Plus, they’re both literally robots with no capacity for emotions. So in a way, they’re both equally poorly-matched. Probably the best thing to do is to put them both into bags and throw them into a volcano. I know that isn’t strictly an answer to the question, but I think you’d have to agree that it definitely is the best thing to do with them.
Chris Coltrane will be performing at Comedy Doubles! in The Dancehouse on Saturday 3rd october.Meow x